I know what you’re thinking. You have an excellent opportunity to broadcast any of the myriad of concerning climate change impacts, and you have chosen the decadent, first world problem of disappearing ski slopes.

Here’s why: one of the fundamental aspects of climate change that makes it so difficult to solve is the inequality problem; those with the most power to take action are often those who will be impacted the least. So, understanding the scale of the impact that Europe’s ski resorts face from rising temperatures and mobilising the industry and its clientele into action is very important.

What have we seen so far?

The last three years have not been great for the ski industry. In December 2016, Switzerland saw the least snow for any winter month since record keeping began. Beneath this fact is a worrying trend: our ski seasons are getting shorter. A paper published in 2016 shows that the blame lies with earlier snow melt in Spring more than later snowfall in Winter, but the season is being chipped away on both sides. Compared to 1970, the snow season now starts on average 12 days later and ends 26 days earlier. The season continues to decline at an average rate of 9 days per decade. 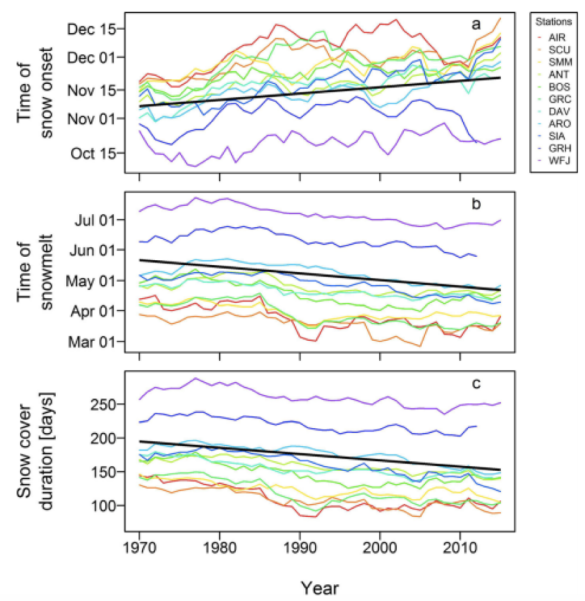 How bad could it get?

A study by the OECD, a group of developed nations, remains one of the most comprehensive assessments of the threat faced by slopes from warming in the Alps. Published in 2006, the detailed report looks at the vulnerability of ski resorts on a case-by-case basis for a total of 666 resorts in France, Switzerland, Germany, Austria and Italy.

To measure the vulnerability of a resort, the study uses the 100 day rule which is based on the concept that for successful operation, a ski resort requires a snow-cover thick enough for skiing for at least 100 days per season. Although not a precise limit, the 100 day rule is widely accepted as a good rule of thumb and a resort with over 100 days of sufficient natural snow is referred to as having natural snow reliability.

In 2006, 90% of the 666 resorts assessed enjoyed natural snow reliability, with the remaining 10% operating in ‘marginal conditions’, i.e. at risk of closure without special measures.

A 2ºC rise in global average temperatures, a target currently being chased by the majority of the world’s countries, will knock around 260 of these resorts below the 100 day threshold, putting them at risk of closure. However, this is may be an optimistic scenario. Not all of the scientific community is confident that we will manage to limit warming to 2 degrees.

If we continue on our current path of greenhouse gas emissions, warming is predicted to reach around 4ºC by the end of this century. In this case, 464 of Europe’s ski resorts could be put out of business, leaving only 30% of the resorts that we have today in operation.

The impacts are not evenly spread throughout Europe. Home to some of the lowest resorts, Germany will be affected more than any other country with 80% of ski areas losing snow reliability at 2ºC and 95% at 4ºC. Austria is the next most vulnerable country followed by France, Italy and then Switzerland.

However, the greatest variability exists within countries. For example, the Savoie region in France, one of Europe’s least vulnerable regions, supports some of the highest resorts in the Alps including Tignes, Val-Thorens and Les Deux Alpes where lifts will take you up well beyond 3000m into the troposphere.

Just 50km down the road is the Haute-Savoie region, which despite the name, is not quite so haute. It contains some of the most popular resorts for Brits such as Morzine, Les Gets and Avoriaz but the Haute-Savoie is one of Europe’s most vulnerable ski regions.

The consequences of this disparity, particularly when occurring in such close proximity, could be an exodus of skiers from lower to higher resorts. Higher resorts could stand to gain from climate change.

Although they may not be a sustainable solution, snow cannons are the preferred choice of weapon against climate change for most ski resorts. However, an organisation in Las Vegas, Nevada, may give us a glimpse of the future. The Desert Research Institute has been perfecting the art of cloud seeding, injecting silver iodide into the air to encourage cloud formation and increase precipitation. Their work in Wyoming proved the method could be economically viable. As the economics begins to stack up against some of the lower resorts in Europe, perhaps we will see this practice being imported to the Alps.